VALOCARB© company with its understanding of the chemistry of CO2 and the biochemical, biological and physiological mechanisms that govern the living world, has understood that the already catastrophic climate changes are only a sad beginning, and that the worst is yet to come, if we do not act effectively, on a very large scale, in extreme urgency.

This severity of the CO2 impact is not well anticipated by most scientific, media and political circles, which focus on the currently visible threat of atmospheric CO2.

In reality, the most serious threat is hidden and comes from CO2 océanique.

In fact, the oceans, by dissolving CO2, regulate atmospheric CO2 which gives them a gigantic « buffer » role for climate change.

Everything is based on the following reversible equilibrium reactions:

This  « acidification » due to CO2 emitted by man alters these equilibrium reactions by causing displacements that lead to an increase in bicarbonate ions (HCO3-) and a decrease in carbonate ions (CO32-), which will have a very concerning negative predictable impact on aquatic life.

CO2 plays a key role at the living level, in these different forms: 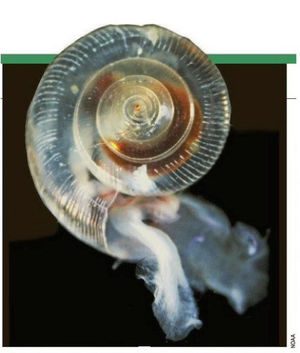 Typical example is that of the sea butterfly (sea snail).
The sea moth is a gastropod mollusc of about 2mm.
In the last decade, the southern ocean has lost 90% of its capacity to dissolve CO2, in parallel and in the same ocean, the sea butterfly has lost about 30% of its population, and so we can predict its extinction within one to two decades.

If this species disappears, when it is at the base of the southern ocean food chain, it is easy to imagine the catastrophic consequences that this will entail, even to the point of threatening the food security of some countries.

If this species disappears, when it is at the base of the southern ocean food chain, it is easy to imagine the catastrophic consequences that this will entail, even to the point of threatening the food security of some countries.

Another typical example is coral.

Corals are colonies of polyps, small animals that make these buildings out of limestone. Their coloration is linked to a symbiosis with unicellular algae, zooxanthellas, to which they offer in particular, protection against their predators.

This symbiosis is all the more beneficial because the polyp is an oxygen-breathing animal generating CO2, while the alga is a plant consuming CO2 and generating oxygen.

For years, coral bleaching has been occurring in all oceans.

This bleaching occurs during periods of high heat: a significant increase in heat, by modifying the solubility constant of CO2, causes a competition of anthropogenic CO2 with CO2 related to biological activities, which results in a disruption of photosynthesis and respiration activities by a saturation effect, variable according to the metabolism of each living species.

As a result of this surplus of anthropogenic CO2 added to the CO2 emitted by the polyps, photosynthesis increases and generates an excess of oxygen.

The breathing of the polyps is also disturbed by this surplus of CO2, but also by the excess of oxygen, which becomes toxic. As Paracelsus said: « Everything is poison, nothing is poison, it is the dose that makes the poison ».

The symbiosis no longer works, and the two players separate: without seaweed, the coral first bleaches, then dies !

Some countries have already announced the loss of 90% of their coral reefs and even the Australian Great Barrier Reef is threatened.

If corals disappear, about 30% of our planet’s life forms will disappear, because coral reefs are first and foremost a place of life for countless species.

If corals disappear, about 30% of our planet’s life forms will disappear, because coral reefs are first and foremost a place of life for countless species.

All this illustrates well the complex intricacies of the chemistry of CO2 with the world of living which works according to equilibrium displacements and self-regulatory mechanisms that give it its adaptability, but also make it very fragile and vulnerable to sudden changes in its environment.

Of course, CO2 plays a major role in climate change, but above all, it is a key molecule for life, intervening in various forms in breathing, photosynthesis and even in the limestone structures that support and protect the living.

It must be understood in order to measure the magnitude of the threat of such a massive disruption, the biochemical equilibria of this element so special for life on our planet.

For a very long time, we believed, and some still believe, that emitting CO2 into the atmosphere had no impact on our ecosystems.

Unfortunately, by dissolving massively in our oceans, CO2 gradually alters the chemical balances of its various forms in water, and after more than a century of emissions, we now reach a breaking point for many forms of marine life, which we are already witnessing.

But marine life is not the only one threatened by global warming.

Earth life is also threatened, and in a much more appalling way.